Breaking The Sims 4 in ten hours

Having played a lot of The Sims as a child, I was interested to see The Sims 4 on offer for just a few pounds in the recent Steam sale. It was obvious that this was a way to get players hooked and sell more expansions, but I thought it was a good chance to try out the most recent game in one of the series I’ve spent the most hours with and write a review. 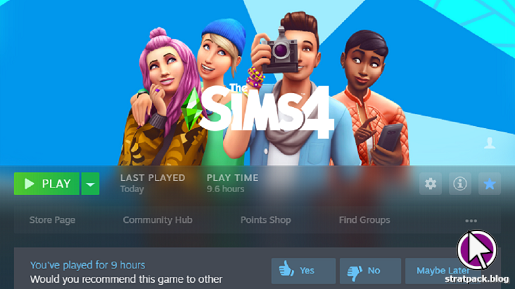 As you may have guessed from the title of this article, I didn’t get that far. So sit back, relax, and enjoy the story of how I got bored with The Sims 4 within a couple of hours - and what I did to keep myself entertained.

I won’t dwell on it, but The Sims 4 is one of those games that sits in a special type of DRM hell, in that even if you buy it on Steam, your first ten minutes with EA’s latest life sim are likely to be spent dusting off the Origin client so you can actually play it. It’ll leave you longing for the days of The Sims 2, back when you could just buy a disc, install the game, and play.

When I could finally start the game, what was evident is that EA were going for the largest market possible here. My modest gaming rig plays most games from 2017 at their highest settings, but very few set themselves up that way after assessing my hardware. The Sims 4 automatically pushed all the sliders to the right - performance shouldn’t be an issue for many people here. 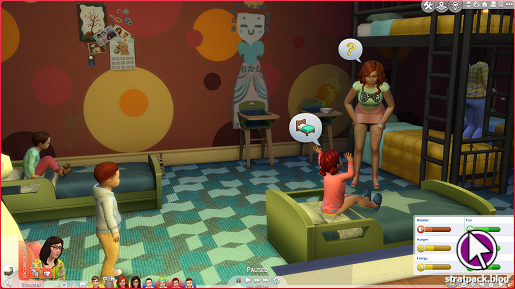 That’s not to say that everything is an upgrade or works perfectly. I noticed plenty of features that functioned well in previous The Sims games, but are either absent or cause issues here. In Create-A-Sim, clothes can no longer be customised via a colour wheel, for example. More frustratingly, Sims frequently just ignore tasks assigned to them, which drop off their queues with no notification. This is especially frustrating when the task is critical, like giving a toddler some food before they are taken away.

Perhaps the game just didn’t like the pathing in the house I built, but this is also the first time in however many hours of Sims play that I’ve had to look up the cheat to reset a Sim who was seemingly just stuck. After a few more hours, NPCs I’d never met before also had a habit of strolling into my house, chatting with my toddlers or taking the rubbish out for my Sims. Weird.

The accusation leveled at The Sims 4 by some older fans was that the focus of the game has shifted. It’s no longer about life simulation, they say, and more geared towards giving casual players the tools to build the house of their dreams and deck it out in fashionable items available via expansion and “stuff” packs. There’s an element of that here, but the thing that dented my enthusiasm for a playthrough was just an overwhelming feeling of monotony.

Maybe it’s because I’m an older, more weary gamer now, but there really was a sense that I’d seen everything Live Mode had to offer before. The Sims 3 piled on the narrative with neighbourhood exploration and quests, but a lot of that seems to be gone (perhaps to be restored by expansions). 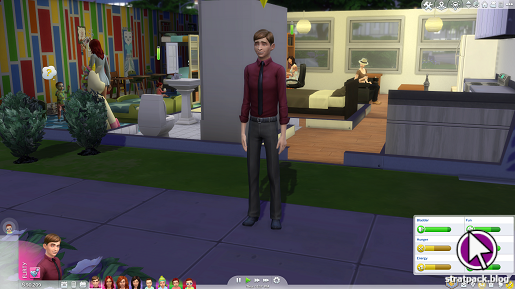 In terms of the way Sims interact with each other and the things around them, the main new feature is a series of mood states (e.g. happy, sad, flirty) that affect actions a Sim can take. While these do seem to affect Sims’ responses to others’ interactions, the new options available to the Sim experiencing the mood are mostly small variants on interactions we’ve seen a thousand times before: telling a self-deprecating joke if embarrassed, for example, or “attempting to flirt” if they’re down in the dumps.

Perhaps I’m just not the target audience anymore, but this all felt very underwhelming. I was simply retreading ground I’d already covered as far back as The Sims 2, and there weren’t enough new quirks and surprises to keep me interested. The Sims 4 also seems incredibly easy. My Sim wanted a relationship, so I spoke to somebody on the street and went from casual conversation to flirting, kissing, agreeing to be partners, WooHooing, and trying for a baby all in one in-game evening. There was no challenge to it. So I made an executive decision: I abandoned the goal of writing a full review, and instead set out to test the game’s limits until they broke.

After noticing how easy the game’s romance systems were, I set out on my own challenge - to see how many babies my Sim could father before things all came tumbling down around him. My Sim got into a routine, chatting to new people on the street, inviting them inside for a date, and trying for a baby the same day. It was ridiculous how easy this all was. He ended up with six simultaneous girlfriends, all of whom were potentially pregnant.

It still seemed too easy, so I decided to add some peril by inviting all of them to a party at one of the girlfriends’ houses. I expected this to spark a wave of arguments and break-ups, but astoundingly they were all happy to chat and dance together as a group, somehow unaware of the ridiculous social dynamics at play. Nobody even batted an eyelid as Strat Packer disappeared upstairs to WooHoo with his first girlfriend, and he even used the opportunity to hit it off with her sister, adding a seventh potential heir to the rotation. 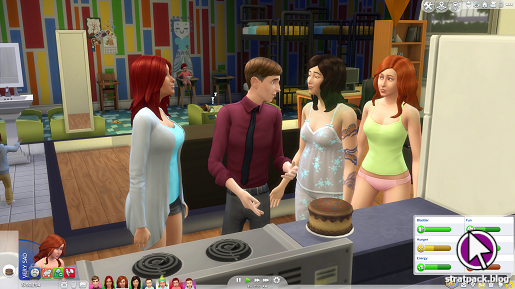 Hmm… How to up the stakes further? I invited all of the heavily pregnant Sims over to hang out and invited as many as possible to join the household (limited by the eight-Sim cap). Before too long, my Sim was living with three girlfriends and four children, with an additional four kids floating around the neighbourhood from the others. Also amusing was that only one of the other mothers decided to call my Sim to tell him about the birth of his son.

This latest move sparked the chaos I was looking for. Four children would have been challenging enough on their own, but it was the love square that really brought the spice. In attempting to take care of the kids, I couldn’t keep an eye on all my adult Sims at once, meaning that any automatic flirtation or kissing set in motion a log chain of fury, slaps, and mirror pep talks that finally gave the entertainment I was seeking. It turned out that balancing childcare and three relationships was the equivalent of a hard mode for The Sims 4, finally delivering the challenge I was looking for.

Aside from adding another crazy The Sims story to the internet’s massive archive, what I learnt from all this is that The Sims 4 is just not very good as a vanilla life simulation game. It lacks the charm that the early entries in the series had, there aren’t enough new surprises to keep a long-time player entertained, and it’s even broken in some places where it wasn’t before. 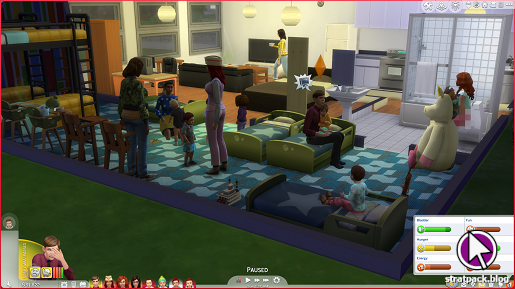 However, the increased performance (specifically when handling ten or more Sims on the same lot at once) and inconsistent social system make it an entertaining playground for those who approach the game as a sandbox to complete unorthodox challenges or just to push the simulation to its limits. The potential for chaos here is huge, and if all you want to do is play God and watch things fall apart inside a virtual dollhouse, The Sims 4 is well worth the £4 or so it is frequently reduced to in Steam sales.