Things missing from The Sims 4

I wrote last week about my first impressions of The Sims 4 (spoiler alert: they weren’t great). At the time I had a general feeling that the game lacked the quirkiness of previous titles in the series, but couldn’t quite put my finger on what exactly was missing from the latest release.

I’ve had an extra week to play the game and think more deeply about it, and I’ve been keeping a running list of all the things I noticed that were in previous versions of The Sims but are not in The Sims 4. I’ve recreated this below, and will continue adding for as long as I keep playing the game. 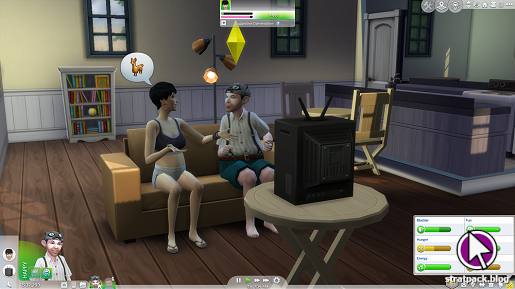 Disclaimer: There are likely to be some items on this list that either are in the game (and I just haven’t played long enough to see them) or were added in The Sims 4’s many expansions. Let me know if so, but I’ll probably still keep them here - in the former scenario I’ve obviously seen a situation where they should have applied but didn’t, and in the latter it’s still not right that something that came with previous base games isn’t included now.

Starting with one that’s close to The Sims fans’ hearts, every game prior to The Sims 4 had a burglar that would sometimes appear on your lot at night with a creepy little tune and try to steal your stuff. If you were prepared, you had an alarm and the police were immediately summoned. If you weren’t, your only hope was to try to wake your Sim and get them to call the police before the intruder could flee. Unfortunately this much-loved mechanic, which mixed things up from time to time, has completely disappeared.

Variety when inviting Sims over

The Sims 4 also seemingly strips back the possible responses when inviting Sims over to your house to hang out. The older games would keep track of their work schedules, give excuses (the frequency of which depended on your Sim’s relationship with them), and throw wildcards like asking if friends could come, too. Since getting started with The Sims 4, the only rejections I’ve had are if a Sim is sleeping (and they all wake at 7am, apparently) or if my Sim’s relationship is low enough that the two are mortal enemies.

Some of Simlish’s most iconic moments were when Sims used to turn directly to the camera and yell, normally to complain about their needs. There were also times from The Sims 2 onwards when Sims would quickly celebrate or complain about their next interactions depending on whether they matched their personalities or aspirations. As well as Sims being less vocal in general, these moments are gone in The Sims 4, which plays it much straighter - an odd choice for a game that is actually much easier than it used to be.

Once upon a time, if your Sim was sleeping in a room and somebody turned on a TV or stereo, they’d wake up and complain about the noise. In the series’ latest entry I can put my toddler to bed a tile away from a sound system blasting at full volume and they’ll sleep through it without any issues at all. Maybe this was deliberate - TVs and stereos are seemingly attractive objects to Sims left to their own devices - but it’s another example of a small omission that detracts from the game’s realism and challenge. 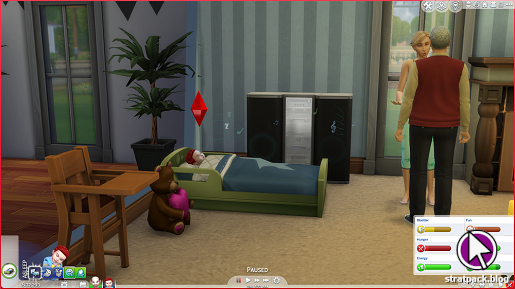 Years ago, Sims were roughly capable of taking care of themselves. They didn’t always get it perfectly right, but their AI was passable and they wouldn’t usually die if unattended. In fact, sometimes it was entertaining to hit the triple speed button and see what they got up to of their own accord. In The Sims 4 they all seem to have had lobotomies. Sometimes Sims will choose interactions that satisfy their needs, but if you give them an hour or two to themselves it’s much more common to see them stood on the spot, shrugging their shoulders and stretching until you intervene again.

Remember the Social Bunny, the Sim Shrink, and Mrs. Crumplebottom? The Tragic Clown might have made an eventual comeback, but other than him, many of the fun and quirky side characters that used to show up in specific circumstances (usually emotionally extreme situations) or wander lots causing mischief have simply been cut out, which is a shame because they were key contributors to the slightly surreal atmosphere of the earlier games.