Anyone who reads this blog will know that I like to play some emulated games from time to time - normally revisiting PlayStation 2 classics like PES 5 and Gran Turismo 3. But retro gaming on a PC has its downsides. You need to install an emulator for each console, clog up your hard drive with ROMs, and tweak settings to make sure the graphics look good on a modern monitor. Surely there must be an easier way to play old favourites?

Some friends recently gave me an amazing gift that provides the answer. The Raspberry Pi retro gaming kit, available from The Pi Hut, consists of a Raspberry Pi 4, the required memory card and cables, and two SNES-style controllers. It’s more than capable of running the free Retropie retro gaming distribution, which includes emulators for a large range of systems. 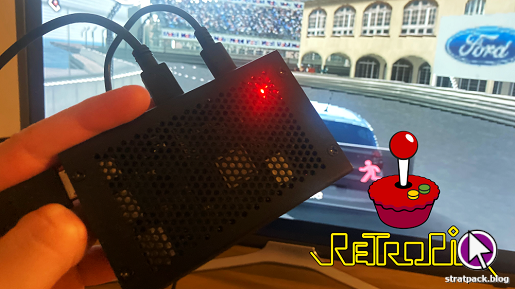 I’ll write a full explanation of how to set up and configure Retropie at a later date, but it’s all deliciously simple stuff: plug in the cables, install Linux and Retropie, copy some games over to the preconfigured network share, and get going. It’s also ridiculously easy to get a PlayStation 4 or Xbox One controller working either via USB or (with a little more tweaking) wireless, so I can’t speak to the quality of the USB controllers that came in the box.

Retropie can play games from a huge number of systems, including the PlayStation, PSP, Dreamcast, GameCube, Nintendo 64, several Game Boys, NES, SNES, and many more. Some of the more modern emulators don’t work due to the Raspberry Pi’s processor, unfortunately - but hey, you can’t have everything. I’ll just have to continue playing those games on my PC.

But what the kit and Retropie give me is a neat little box that can sit under my TV and play a variety of digital retro games to break up my day. So far, that’s meant quite a bit of the 1995 game Formula 1 for the PS1, and - after quite a bit of fuss trying to get the Amiga emulator working - the absolute classic Deluxe Galaga. It really all works rather well.

I’ll return to Retropie and how to set it up in future, including full details of the Amiga setup, but for now I just wanted to say how great this little kit is (and you could probably put it together even cheaper by buying the Pi outright). Until then, I’ve got some retro games to play…