F1 22 is better than the internet says

F1 22’s free-to-play weekend came at a tough time for Codemasters and EA - at least as far as my evaluation was concerned. Coming hot off the heels of my retrospective on the PS1 classic Formula 1 97, they had their work cut out to impress me - but impress me they certainly did.

Annual sports games have to put the work in to break free of the “last year’s game with this year’s stats” tag, and F1 22 didn’t get off to a good start. The April trailer didn’t showcase any notable gameplay features and raised concerns with its focus on F1 Life - a new game mode featuring supercars, clothing, and even sofas that all seemed perfect microtransaction territory.

Your first few minutes with F1 22 will confirm it has been EA-ified to a much greater degree than its predecessor. Before doing anything else it wanted me to pick a supercar for my virtual luxury home, which didn’t bode well. But once I’d skipped through some dialogues and muted the overly loud EA Trax, it was possible to relegate the unnecessary additions to the background and focus on what is actually a solid step forward on the track.

Online discussion around the game, including on the series subreddit, has been consistently negative. Some of that criticism concerned the new microtransaction-focused features, but just as much was about gameplay problems - bugs, handling issues, dodgy driving by the AI, and so on. 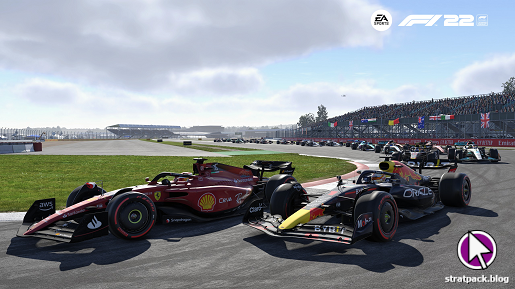 Perhaps the patches pushed out since July have done the trick, but I didn’t encounter any issues during what Steam tells me was a four-hour tryout across several races over the weekend. It’s possible the developers were helped out by the regulations overhaul for the 2022 season, but in my eyes F1 22 in its current state is a significant step up over F1 2021.

With my chosen configuration (mid traction control with most other assists turned off), the game is much more challenging than last year’s edition. The cars require more careful control, and the rear end can more easily step out mid-turn or on exit, meaning you need to be a lot more precise in your power application or risk spinning into the wall. This results in a far more rewarding experience when you do pull off a perfect lap or overtaking manoeuvre.

Graphics and performance have also seen some uplift. I was surprised when the game automatically set everything to Ultra and turned on ray tracing, and I expected a poor frame rate. But my 3070 Ti was more than up to the job. The game seems to have increased fidelity and detail, but also runs better than F1 2021 on average, which is a fantastic combination to see.

In short, despite all the unnecessary surrounding distractions, it was F1 22’s gameplay that won me over. I bought it while it was on offer and it’ll now be in my regular rotation. I’ll likely produce some articles along the lines of my FIFA 22 Career Mode series - I’m thinking a season-long campaign in search of the win that has eluded Mercedes in real life. Watch this space.

Send me an email
« Formula 1 97 (PS1) retrospective
F1 22: How to choose the perfect difficulty and assists »