F1 22: How to choose the perfect difficulty and assists

Half of the enjoyment of any racing game comes from achieving the perfect balance between your own ability, the challenge of keeping the car under control at fast speeds, and the competition offered by your AI rivals.

F1 22 is no exception, and having recently purchased the game, I thought I’d share the process I went through to get all those sliders in the right places. And while the options referenced in the tips below are specific to Codemasters’ latest title, you could equally use the general principles to configure any sim or simcade racer to be as enjoyable as possible.

Forget AI opponents for a second and focus on your own car. You won’t be having any fun at all if you’re spinning the car every time you put your foot on the accelerator, but equally, racing games can feel like passively watching TV footage if the game is handling all the braking and steering for you. 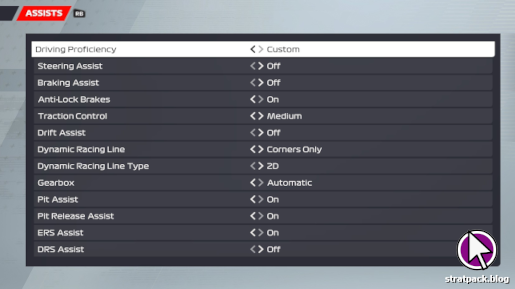 In my eyes, you’ll always want to turn Steering Assist and Braking Assist off. After all, aren’t those basic controls the whole reason you’re playing the game - to feel like you’re driving an F1 car? From there, the options have more subtle effects and are more down to personal preference.

Anti-Lock Brakes, Traction Control, and Drift Assist are all about stability, and you’ll want to experiment with them to find what feels best. I usually find the sweet spot to be somewhere in the middle, where the car is stable enough that the game isn’t completely frustrating, but loose enough that I still need to be careful when applying power coming out of corners.

The Dynamic Racing Line settings are significant to your game experience. For a start, the racing line is never really needed on the straights, so you might as well at least go for Corners Only. After this point, I think whether you’ll turn it off entirely is largely down to how much time you have to learn the tracks. Racing is certainly more rewarding without it if you have the time to invest, and the 2D line is much less intrusive than the 3D one.

Pit Assist settings I usually leave on to give my hands a little break when I stop, but if you’re seeking full immersion then it’s best to disable them. DRS Assist should definitely be off, since opening that rear-wing window to blast past an opponent is one of the best feelings in the game. ERS Assist, on the other hand, gives you another useful tool in your arsenal if turned off, but I can also understand that it might be a little too much to worry about while driving, and the game does a fair job of utilising the charge anyway.

By now, you should have the assists configured to a point where your car is a challenge to drive, but not so much so that you’re constantly spinning into walls. Now it’s time to adjust your opponents’ capabilities to match your speed and offer a consistent challenge in single player. 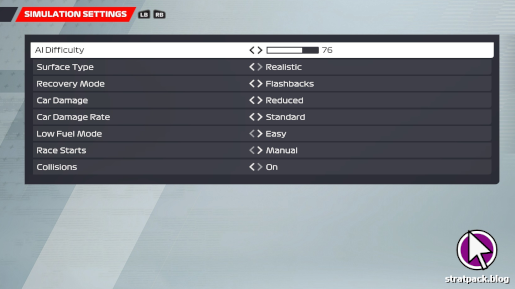 Unlike some other racing games, which offer proficiency and aggression sliders, F1 22 just has one bar named AI Difficulty. In short, you want the AI to be about as fast as you in equal machinery. This will take some testing - if you’re easily pulling away from your teammate during races then you need to crank it up, while if you find cars forming a train behind you while the driver in front disappears into the distance, you need to turn it down.

The Recovery Mode setting allows you to turn off flashbacks, which let you rewind time and try again when things go wrong. I recommend leaving this on - some self-restraint will be required, but the AI in F1 22 is so aggressive that there will inevitably be collisions that aren’t your fault, for which you’ll need flashbacks to avoid race-ending damage and preserve your sanity.

The Car Damage settings are again personal preference. While some players aim to avoid all collisions and turn it off altogether, I normally leave damage on Reduced. This means that my major mistakes are appropriately punished, but I’m not left correcting the steering for the rest of the race because my front wing endplate grazed somebody’s tyre into Turn 1.

The last important setting is Race Starts. Assisted essentially allows you to simply hit the accelerator to move off the grid, while Manual requires you to hold the clutch in, apply some revs, and release it when the lights go out. The latter is much more engaging and adds some excitement to race starts.

While there are a few other settings, the sections above cover all the important ones. Once you’ve tweaked and tested them all, you’ll have a car that’s a decent challenge to drive and a group of opponents finely tuned to your own ability - then it’s finally time to go racing!

Send me an email
« F1 22 is better than the internet says
Call of Duty: Modern Warfare 3 (Xbox 360) retrospective »