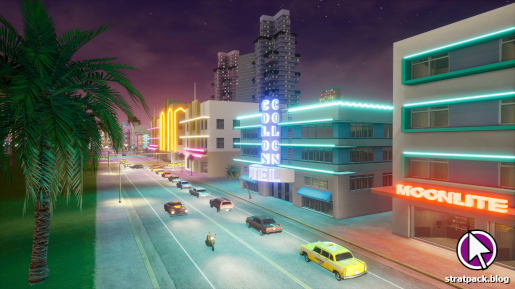 It was last week, nearly nine whole years after the release of Grand Theft Auto V, that an article by Bloomberg’s Jason Schreier finally provided some concrete information on its sequel - at least if you believe his ex-Rockstar sources. The piece focused mainly on how progressive Rockstar is apparently now trying to be, but we did get some interesting details on GTA VI:

Much of the online reaction to the article consisted of misguided complaints about the female character, and perhaps-not-so-misguided concerns about how the tone of the game will be affected by the shift in its developer’s culture. But for me, the thing that set the alarm bells ringing was the line about GTA VI’s setting and how the game will be extended after launch.

I would happily play a game as a female character, and I could tolerate a GTA game with blunted satire (it’s been going downhill since the peak that was GTA IV, anyway), but what would be harder to stomach is a sequel that doesn’t stand on its own two feet as a quality game, and instead seeks to establish a platform to keep people spending for years to come.

Rockstar stumbled upon this model with GTA V. The main game released in 2013, and as players completed the story and moved on to GTA Online the company pivoted, realising that it could make more money by having players pay real money to buy imaginary, multiplayer-only cars and yachts, only otherwise obtainable through endless hours of grinding.

The lines in the article that stood out to me the most were about the scope and roadmap for the project. If Schreier’s sources are correct, the game will release with a Vice City setting but extra missions and cities will be added later. He praises this as a way to avoid development crunch, but my worry is about what this model means for players and the game overall.

Games companies have realised in recent years that they can make a lot of money from live service games, and titles that would have previously been almost certain single-player classics - think Gran Turismo 7 or Diablo Immortal, for example - have been ruined by the model, prioritising microtransactions over completeness and - y’know - fun.

It is possible for a title to have online and add-on elements and be a good game, but I guess what I’m saying is that I don’t trust modern Rockstar to deliver an experience that I will enjoy as much as previous GTA games. The company’s trademark used to be top-tier single player titles, but it seems that GTA Online’s popularity has changed all that, with the company even going so far as to cancel planned single-player expansions.

We still have 2018’s Red Dead Redemption 2 as proof of what Rockstar can achieve in the single player arena, but the few details we have been given on GTA VI don’t sound all that appealing. It’s early days, and it could still turn out to be the sequel we’re all dreaming of, but while any GTA game used to be a slam-dunk preorder, I think I’ll be waiting for far more information - maybe even reviews - before spending my hard-earned cash on this one.