Rockstar practically broke Twitter with its announcement of what will surely be Grand Theft Auto VI on 4th February. At the time of writing, the tweet is approaching 600,000 likes and fans are speculating over how the next iteration will build on the hyper-successful GTA V.

But while the most recent game is the one that broke all records, selling more than 155 million copies and making more than $6 billion for Take-Two Interactive since its 2013 release, I still think that 2008’s GTA IV is in many ways the pinnacle of the series, and maybe that’s precisely because it didn’t try to do everything bigger and better all of the time. 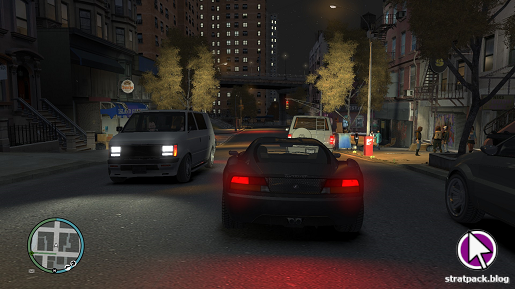 Criticism and its consequences

On release, some fans complained about GTA IV being too grounded and gritty after the jet packs, planes, and tanks of San Andreas. GTA should be all about the over-the-top explosions and chases, they said. Rockstar back-pedalled slightly with its second expansion, The Ballad of Gay Tony, which provided at least some mayhem against the game’s weightier backdrop.

Enter GTA V in 2013. With the next - and last, to date - entry in the series, Rockstar set out to give these fans what they wanted. Michael, Franklin, and Trevor’s story encompassed all kinds of carnage, bringing the out-of-control feel of earlier games to the graphics and writing of the HD universe. 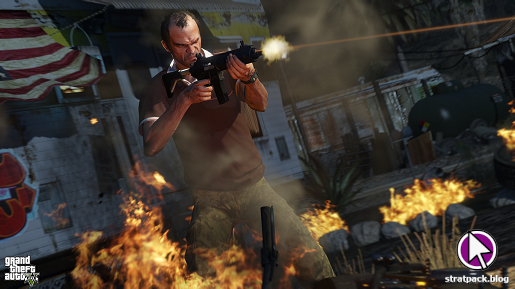 But to me, something always feels a bit off driving around that incarnation of Los Santos. The map’s much larger size meant it would never be as dense as GTA IV, but it also feels much more… video gamey. Everything revolves around the player, with random pedestrians calling out to compliment your car, police zeroing in on witness-free gunshots in the middle of the desert and then disappearing when your back is turned, and every interaction ending in confrontation with either the city’s residents or law enforcement.

Civilian motorists jut out into your path to give you something to dodge, then face plant on the steering wheel, killed by a tap to their rear bumper. Everything is at its most dramatic, played up like it’s an 80s cop show, and there’s always the sense that - just like that squad car you just outran - everything ceases to exist when it’s outside of the player’s cone of vision.

By contrast, GTA IV’s Liberty City felt like it didn’t care whether the player, as Niko Bellic, was there or not. It felt like life would continue regardless.

Niko walked the streets anonymously, free to listen in on conversations, dip into internet cafes, or visit the city’s tourist traps and take it all in. Police cars actually patrolled the city streets, and even just cruising around you’d see cops running after petty criminals. If you did choose the life of crime (and who didn’t? This is GTA, after all) there was a chance your misdeed would go unnoticed if nobody was around to see it. 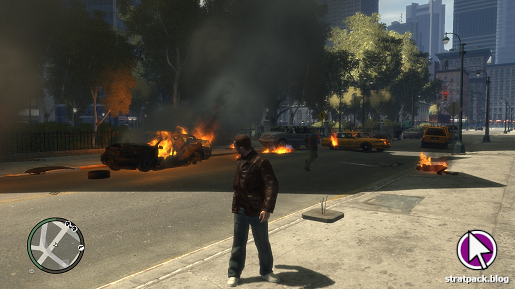 You might argue that this isn’t what GTA games are about - that they’re all about the carnage, the car chases and gunfights. But GTA IV’s world-first, player-second ethos meant there were realistic rules of cause and effect that applied equally to both Niko and NPCs. In other words, the consequence of Niko’s natural place within his environment was that you could get much more creative with the commotion you could cause.

One of my favourite pastimes in GTA IV was seeing how far I could stretch the game’s AI and physics models. Think getting the police to arrest a guy you provoked because they saw him punch you, starting fights between pedestrians, or bribing a homeless guy so he’ll help you out in a jam. With careful planning, it was even possible to cause a traffic jam, start a vehicle fire, and watch the explosions jump from car to car, all while posing as a seemingly innocent bystander with no wanted level.

Most of this experimental-type fun disappeared with GTA V. I tried setting up the same scenario (which you would have thought would be easier with the inclusion of the jerry can), but got one star as soon as the fire started, and two when it caught on. Shoot some “speed holes” in your own car under a bridge somewhere? The cops somehow have your description. Even just stand next to somebody for too long? Apparently that’s a crime now, too.

Unfortunately, given the amount of money Take-Two has made from GTA V and GTA Online, I don’t think we’ll ever get another game like GTA IV. The high-octane, no-holds-barred path is just too lucrative, especially when you consider how much more potential it has for additional, flamboyant online content, requiring eternal grinding or Shark cards to obtain. 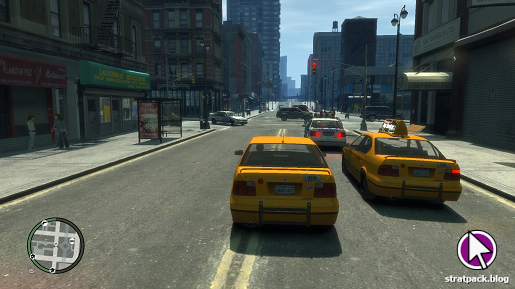 This is why in my mind, GTA IV will always be the great GTA game, created when Rockstar looked at the new Xbox 360 and PlayStation 3 hardware and thought, “What more will this allow us to give the player?” Now, after an entire generation without a new GTA game, the future looks rather grim.

I’ll do a full retrospective on GTA IV when I have the time to play through the story again, but for now I’d simply urge you to go and browse YouTube to remind yourself of what an immersive place Liberty City was and remember all the small mechanics and systems that made it that way and have since fallen away. We might never see them in GTA again.

Send me an email
« Gran Turismo 7: Everything we know
The newbie's guide to buying Formula 1 models »