Just in case you hadn’t already heard, Stray is a game where you play as a cat. Ever since it was shown off at a PlayStation event in 2020, the internet has been abuzz with talk about it, but mostly from the memey cat angle rather than any discussion of the actual game. Intrigued, I picked up a copy when it was finally released last week so I could find out for myself whether it was a compelling experience or just popular due to its feline protagonist. 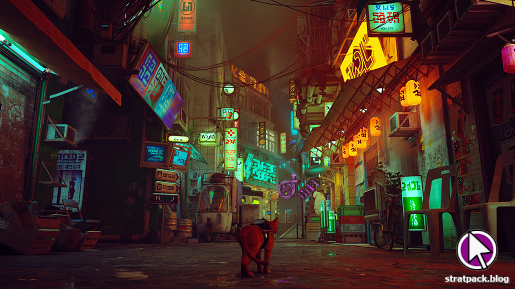 Stray’s opening moments are peaceful. Waking up with your cat buddies, you run as a pack through an overgrown passage, taking their lead as you learn to navigate the environment on four feet. But tragedy strikes and the cat misses a jump, sliding into a pit where you’re unable to reach your pals. You limp through a door and enter a cyberpunk city full of neon and robots whose heads look like the old Apple error icon. From there, the rest of the game concerns your quest to find a way back to the fabled Outside.

Right away, you’ll notice that this is a beautiful game. The cat animation is very well done, from general movement right down to the little ear twitches, and nearly every environment looks like it could be ripped straight from the concept art. While the plaudits will go to the neon-draped streets, I’m a particular fan of some of the robots’ living quarters, which are stacked high with books and 90s computing equipment. I hope BlueTwelve Studio will find the time to add a photo mode later, because the camera angles, the cat’s poses, and the on-screen prompts obstruct some fantastic frames. 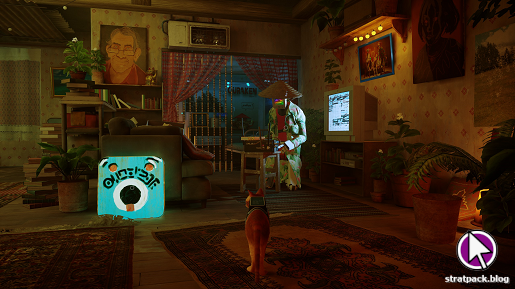 Mechanically speaking, the bulk of Stray consists of simple 3D platforming. With a rough knowledge of where you’re going, you’ll need to scramble up pipes, signs, and air conditioning units to find a path above the city to reach your destination. Sometimes you’ll need to evade snappy little headcrab-like enemies called Zurks, and at others there are simple puzzles that involve rolling barrels around or finding and inserting plugs into computers. Some of my favourites utilised cat-specific mechanics – walking on a keyboard to send a message, or scratching a blind to reveal the window behind it.

That said, the scope of the game would be somewhat limited if you spent its entirety alone as a cat. The robots talk to the cat as though it has human-level intelligence, but it can’t speak back, and can only carry small objects. Luckily, fairly early on you meet a robot named B-12 who acts as a conduit between the cat and the world, translating dialogue and grabbing items on your behalf. I won’t go into the reasons in this mostly spoiler-free review, but by the end of the game you could make a strong argument that B-12 is the real main character, and that the whole show exists to tell his story.

Over the course of said story you’ll see a variety of areas, from slums and sewers to city streets and canals, and – with a little help from B-12 and his superior dexterity – there’s a surprising mechanical variety for a game about a cat. While the game’s bread and butter is the humble item fetch quest – the type where you’ll stumble on the solution if you just explore the area enough – there are also parts involving fast-paced pursuits, some slightly clunky stealth sections, and even third-person shooter elements. 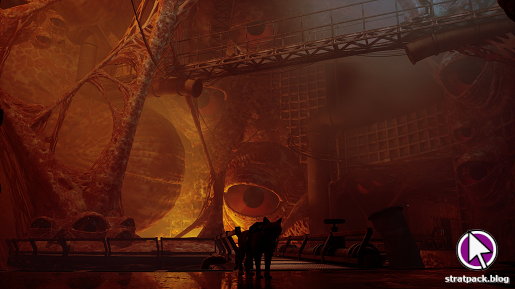 Stray might be fairly simple in terms of gameplay, but its charm and atmosphere pull it through. Although the city is more threatening than the initial natural area, it is still backed by a light, synthwave-style soundtrack that both matches its environs and delivers a relaxing experience that very much feels like you are exploring the city districts with the innocence and curiosity of a cat. This is despite some fairly high stakes in the story, which spans about five hours and has some quite touching moments (quite an achievement when you consider there is no spoken dialogue in the game).

On that topic, this is a game by a small studio, and it does show. I’m not as concerned as others about the length of the game – it has a dense enough concentration of detail and quality that it still feels like a good proposition – but there are some elements where it’s clear money had to be saved. For example, whenever a character needs to put on an item of clothing during the story, the screen fades to black and when we return they are magically wearing it. It’s forgivable in the circumstances, but that extra animation or two would have gone a long way to maintain the player’s immersion.

Stray also doesn’t seem to be incredibly well optimised for PC play. It’s not game breaking – for 95 per cent of my play time performance was flawless, even while exploring some of the more dense and beautiful environments I previously mentioned – but there were certain areas where the frame rate suffered somewhat, even running on my new 3070 Ti. It also crashed once fairly early on, although that may have been because I Alt-tabbed to my notes at a time it didn’t like, because thankfully the issue didn’t reoccur. 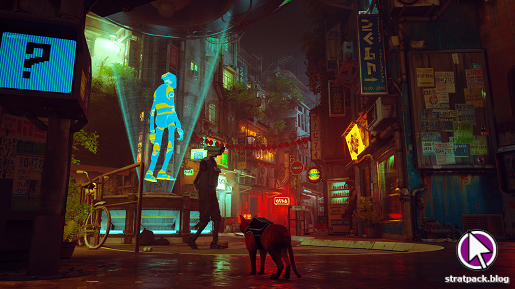 So that’s Stray in a nutshell. I wouldn’t exactly call it groundbreaking, but BlueTwelve have built a charming, atmospheric, and pretty world for you to lose a few hours in. The game may be a little short for some people’s tastes, but at about a third of the release price of a AAA game, I’m not complaining. Stray is enjoyable, original, and a game I might return to as a sort of comfort play once enough time has elapsed for me to have forgotten the details.