I finally gave into temptation and bought the final chapter of in one of my favourite series of recent years. Hitman 3 takes Agent 47 to new locations and promises to wrap up the trilogy’s narrative - but given the behind-the-scenes turmoil at IO Interactive during its development, does it deliver the same level of quality as the previous games? Read on to find out.

Note: Hitman 3 sits in an awkward spot, right on the boundary between what I would call a review and a retrospective. Note that while this article is labelled “review”, it will contain some spoilers due to the age of the game.

Since the series’ reboot in 2016, Hitman’s World of Assassination has set a consistent high tide mark for what was a rather lucklustre console generation compared to its predecessor. There was - and still is - nothing quite like IO Interactive’s “social stealth” games, which task the player with assassinating targets not with firepower or button-mashing dexterity, but through careful observation, planning, and execution, all without leaving a trace.

For the uninitiated, each Hitman level sets the globetrotting Agent 47 loose in a new location - in Hitman 3’s case ranging from Dubai skyscrapers to English country houses and Argentinian vineyards. While the player does have access to guns, the fun is in quietly subduing carefully selected civilians to disguise yourself and gain access to restricted areas. 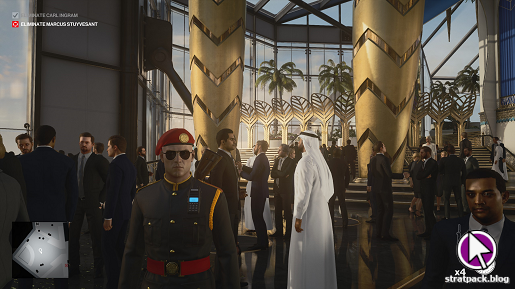 The sandboxes themselves are a joy to explore, intricately detailed and full of interesting and funny dialogue to overhear. Curiosity is nearly always rewarded when discovering new areas, and the levels are presented with such gorgeous graphics that the game sometimes feels almost like a window into how the other half live, in much the same way that the Assassin’s Creed games can be used as a sort of historical sightseeing tour.

Due to the complexity of the levels, the AI doesn’t always get things right (it’s still remarkably good - it’s just unreasonable to ask it to understand every possible context it could be presented with), but for the most part the game’s humourous - sometimes borderline slapstick - approach to stealth and action helps to paper over the cracks and avoid breaking immersion.

When it comes to the killings themselves, Hitman does what all my favourite games do. It gives the player the tools and lets them choose what happens next. You are free to walk up to each target and shoot or strangle them, but it’s much more rewarding to scout the level and find opportunities to set up elaborate “accidents” - even more so if you turn off the on-screen prompts, which can make this feel a little bit like painting by numbers. 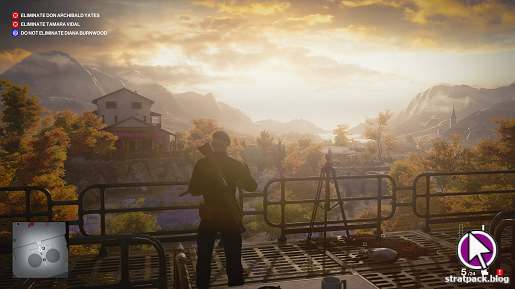 Because of the amount of time you spend blending in and observing, the pacing of the gameplay is almost like Paranormal Activity’s approach to horror - a long, slow build-up while you try to pretend everything is normal and put the pieces in place, followed by those crucial, adrenaline-pumping seconds as you execute your plan, and hopefully the target, too.

Agent 47 begins his 2021 world tour at the opening of a Dubai skyscraper. The sprawling level spans the upper floors of the building and is perhaps the game’s most beautiful, the sun beaming in across the ornate interior. My first target was tragically electrocuted by his own art exhibit, while my favourite assassination option here was to steal some security keycards, sabotage my second target’s parachute, and trigger an evacuation of the penthouse where he was holed up to send him tumbling to his death.

The second mission takes us to a country house in Dartmoor. There’s an acclaimed murder mystery-style story to be explored here, but being dumped outside a restricted compound immediately put me in Splinter Cell mode. I went full stealth, infiltrating the grounds and climbing the drainpipes to the top floor, where I eliminated the target as she screamed into a pillow in a secret room and solved a simple puzzle to steal some files from her safe. 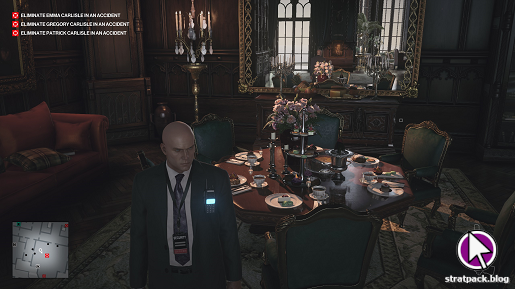 Berlin required a similar approach, slipping quietly into a warehouse rave. The twist here is that the player must identify five ICA agents by exploring and listening in to conversations before eliminating them. I stumbled into enough agents and killed most of them with a pistol shot from distance, with the club music helping to cover up any commotion. This was one of my least favourite Hitman missions, but one I will probably revisit and try to approach more methodically now I know roughly where I’m going.

Next, Agent 47 is tasked with killing two targets and deleting data from a server at a secret underground ICA facility in Chongqing, China. This was an enjoyable level, and again very pretty, the rainy city draped with neon lights in a way that reminded me of Stray. This was the first time Hitman 3 lined me up with a viable sniper shot, taking a target out through a distant window, before I disguised myself as an ICA analyst to go underground and find my second victim. The ICA area suffers from some awful voice acting for several critical characters, but this one will still certainly be worth a replay. 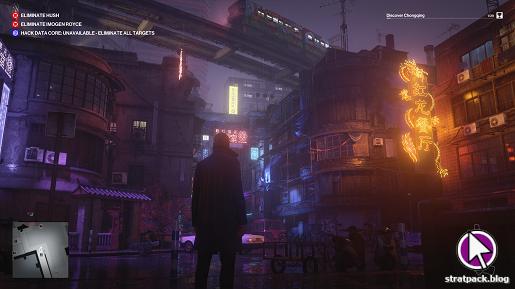 This is also where the game first strays from its winning formula and tries to introduce more of a narrative to the gameplay. Deleting data from the ICA server puts the facility on red alert, and Agent 47 must escape by sneaking past tens of patrolling guards. I’m in two minds about this - on one hand it certainly provides an adrenaline-pumping mission finale, but on the other it was more scripted than anything in a Hitman sandbox should be, and denied me the usual satisfaction of completing a mission undetected.

The Mendoza vineyard mission is also story-driven as the game attempts to push the series’ narrative towards its denouement. This time Diana Burnwood - the mostly disembodied voice of Agent 47’s handler for the earlier games - is in attendance, and wants him to kill one of her rivals for the position of Constant (don’t ask - it’s a long story), as well as the owner of the winery.

The latter is fairly straightforward (I visited his house disguised as his lawyer and strangled him), but it’s clear the game is cranking up the difficulty with Diana’s rival Tamara Vidal. Diana herself is rarely more than a metre from her, ruling out any kind of explosive elimination, while even a silenced shot sets every guard in the place on 47. In the end I located a bottle of her favourite wine and posed as a waiter to serve her a poisoned glass. 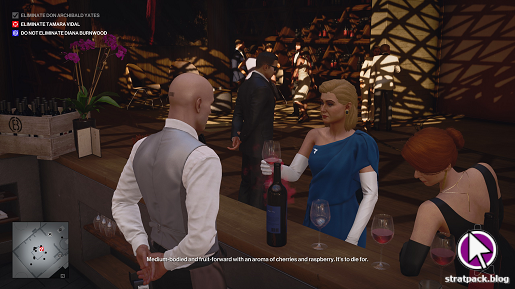 That’s almost the end of the game, as far as I’m concerned. Nothing from this point plays like a Hitman game, and while it serves to tie up all of the story’s loose ends, I don’t know anybody who plays these games for the narrative and it was somewhat underwhelming that the final location turned out not to be another sandbox but a much more linear level.

Still, I’m getting ahead of myself. First, after Diana administers him a nerve agent, 47 has a strange dream sequence where we’re brought face to face with all of the targets we’ve killed through the trilogy. It’s nice that the developers tried to add some fanfare to the finale, but the tone is very serious and feels as though we’re expected to feel some guilt over their deaths, which falls a bit flat in a game that’s all about creative killing.

47 wakes up in a lab where scientists are researching a memory-wiping serum he was given as a child, and on opening the door we realise that we are on a train hurtling through Romania. The last mission of the series sees Agent 47 making his way to the head of the train, travelling through, over, and around carriages in a way was reminiscent of Splinter Cell: Pandora Tomorrow’s train level - just with added disguises. 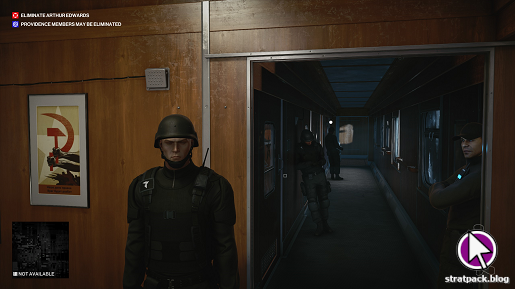 I suppose the trilogy had to have an ending, but the final mission isn’t one I’d ever go back and play. You get to use all of Agent 47’s tricks, but they take on a more simplistic light when working in such confined spaces where there there’s normally only one realistic option to progress laid on a plate (like exactly the right outfit sitting just inside the carriage door). Eventually we reach the front and take care of the main baddie - ironically, by injecting him with the serum - and it’s all over, albeit in a very understated way.

On gameplay alone, Hitman 3 would be one of very few games to earn my maximum five-star rating, but as always seems to be the case these days, it falls short for several business-related reasons. These won’t necessarily ruin your enjoyment of the game - especially if you can get it for a reduced price, like I did - but it’s only fair that they’re taken into account.

The first (and most publicised) of these is that this is a single-player game that essentially must be played online. There’s a full list of what’s missing if you play offline on Reddit, but put simply you’ll have access to the main missions and not much else. Additionally, any games you saved while playing online are inaccessible, and you will be unable to earn the challenge-based unlocks for the levels. It’s a baffling decision for a game with no multiplayer - especially when the online leaderboards are full of apparent cheaters who completed every mission in less than a minute anyway. 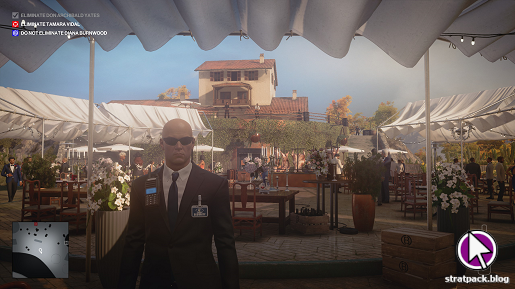 Secondly - and more importantly in the game’s current, supported state - is Hitman 3’s value proposition. Both Hitman and Hitman 2 featured at least six “proper” missions and locations by my count, while Hitman 3 - excluding the very linear train level - provides just five. Again, not a fatal shortcoming, but a little disappointing for such an unusually expensive title, and I’d have felt short changed if I had paid full price for the game.

So, warnings aside, is Hitman 3 worth it? Totally. From exploring the five new sprawling locations to revisting old missions in the updated engine, there are hours of fun and challenge to be found here, and the beauty of the series’ gameplay is that each level offers a ton of replay value to try new routes, disguises, equipment, and assassination options. This is must-play stuff, so my advice would be to pick it up on an offer when you can - just make sure you put aside enough time, because Hitman 3 is very addictive.

Send me an email
« GTA VI leak: Beyond the videos
Fable (PC) retrospective »