Warzone's Godzilla v Kong event is better than it sounds

Any semi-regular reader of this blog will know that I’m a fairly frequent critic of live services and games that make their money with microtransactions, so it may come as a surprise that this week’s article is about Call of Duty: Warzone - and it’s simply about how much fun I’m having. 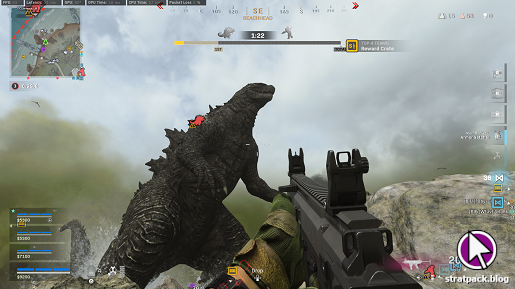 Compounding my apprehension about the new Godzilla v Kong event was the skepticism over video games based on films that has been drilled into gamers over decades. More often than not, these games are some of the most generic titles out there, relying on character recognition to recoup their development costs. Put simply, they’re not usually very good.

Maybe Operation Monarch’s strength, therefore, is that it’s not a standalone Godzilla v Kong game. Instead of a quickly thrown together full title, it’s a separate game mode that retains Warzone’s core gameplay and adds some extra excitement on top by setting two “titans” loose on the map.

From the off, Godzilla and Kong roam Caldera doing their thing and generally looking scarier than your human enemies. Kong throws rocks and imposes his “wrath”, jumping up and stomping down on anything in his path. Godzilla’s signature attack is his heat ray (it’s coloured more like an ice beam, but whatever), which is equally devastating to anything directly in front of him. 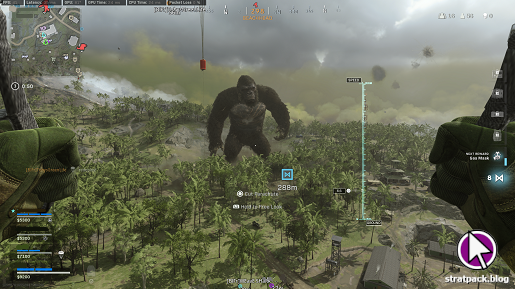 It’s quite fun just to have the titans on the map. They’re constantly roaring, threatening to disrupt your plans with their destructive powers, and just generally looking quite cool on the horizon. And although it’s tangental to your main goals, it feels super cool (and very unlike Call of Duty) to pilot a plane and circle them in the air, peppering them with bullets.

There are objectives here. Players can collect “intel” by dealing damage to the titans, opening crates, and killing other operators. The intel gives you perks, ranging from familiar items like gas masks and armour vests all the way to something called a “SCREAM device”, which allows you to direct the titans’ signature moves towards any point on the map you wish.

Even if you couldn’t care less about Godzilla and Kong, the beauty of the event is that it adds some extra spice to the Warzone formula. Everyone has their own tactics when things get towards the final circle, but the best laid plans can quickly go out the window when you see an incoming ground pound or heat ray barrage pop up on the map right on your location. 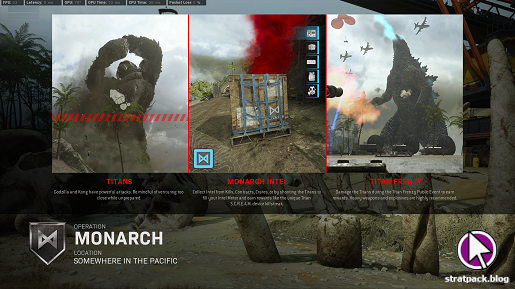 The added randomness keeps you on your toes and leads to situations you wouldn’t usually encounter, adding more of a frantic feel as you’re attacked from all angles by the titans and other competing squads. It also means that even if a team secures a building right in the middle of the final circle, they still might not be safe if they have to flee Kong’s wrath.

Operation Monarch is Warzone on steroids. It’s a whole lot of fun, and I’d recommend making the most of it before it disappears on 25th May. If you looked at the promotions and shrugged like I did, give it a go - at the very least you’ll come away from a few games with a smile on your face.