I have good memories of the Modern Warfare trilogy. Between 2007 and 2011, I bought all the games pretty much on release. This was one of the most popular series around at the time, mostly because of its famous online multiplayer. But while I played online sometimes, that wasn’t really the focal point of these games for me, and I spent more time playing through the campaigns and completing the Special Ops with my friends. 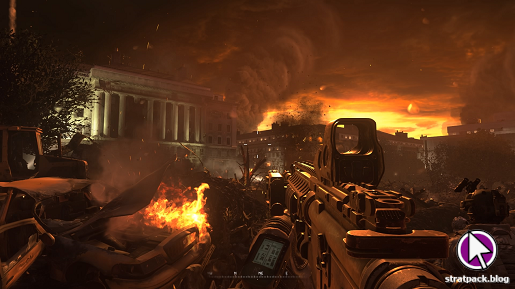 A couple of weeks ago, while I was sat waiting for my annoyingly delayed Gran Turismo 7 delivery, I started flicking around my PS4’s menus and landed on Call of Duty: Modern Warfare 2 Campaign Remastered. I’ve tried to play Call of Duty 4 multiple times in recent years and have never made it past the opening mission (Crew Expendable) because it feels too familiar, but I found MW2 was a distant enough memory that I was able to get into it and play through the campaign to see how well it stands up in the modern day.

Enough of a story for a shooter

When Modern Warfare 2 was published in 2009, war was a distant thing and therefore seemed fair ground for an entertainment product. This certainly speaks to the young, Western perspective I viewed it from at the time of my first playthrough, as the first mission in the campaign has you fighting in Afghanistan, where there was an ongoing conflict even at that time.

Still, given recent real-world developments it was especially jarring to be fighting through dense urban areas from the off. Infinity Ward did try to add some nuance. It’s made clear early in the mission (Team Player) that we’re the good guys and we only shoot if the locals shoot first, and on each death you’re presented with a different philosophical quote – many of which are on the futility of war and lament the needless loss of life it causes. 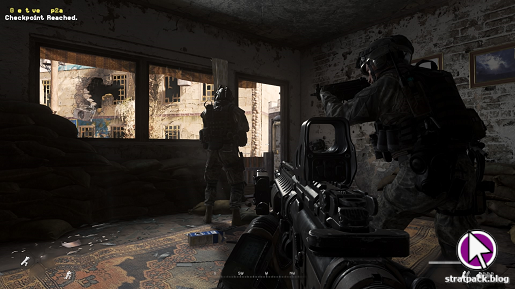 But these attempts at moral grounding are juxtaposed against our pals shouting things like “Whoa, baby!” as huge buildings are levelled, presumably with collateral. And that’s just one example - warfare is always presented with a certain cool factor, despite the aforementioned attempts to convey its futility. There are shooters out there that handle war less sensitively than Call of Duty, but in such worrying circumstances there was the occasional moment when the discomfort proved too much and I had to take a break.

Story has never been a priority for me with COD games – I mainly play for the action and the challenge – but when listening to the cut scenes and reading up on the lore it was hard to ignore the modern day parallels.

At the beginning of MW2 it is explained that the West thought Russia was an ally after the events of COD 4, but nationalism prevailed and made it an enemy once again. Disinformation is also a theme at some points, nowhere more so than in the infamous No Russian mission – a false flag terrorist attack on a Russian airport blamed on the US and used as justification for the start of World War III. Again, having moved to a more populated area at higher risk of terrorism than where I lived in 2009, I found myself more sensitive to the brutality of this mission than I was the first time around. 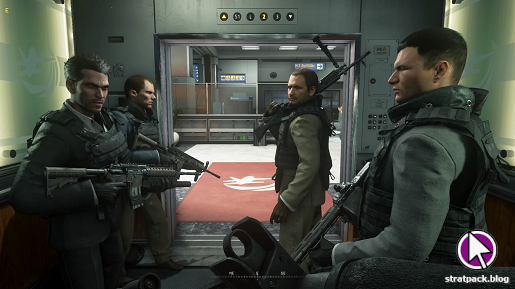 The rest of the story is essentially the US fending off a Russian attack on home soil while elite teams hunt the ultranationalist leader Makarov, and then the treasonous Lieutenant Shepherd, who emerges as the main antagonist. There are also some levels set in Brazil, on a random oil rig, and breaking Captain Price out of the gulag – because where else would the West’s top soldiers possibly be when Washington DC is being invaded?

But none of that is very important – nobody expects a masterpiece of a story from a mainstream first-person shooter anyway, and the whole thing is merely a construct to enable set pieces and opportunities for the player to feel heroic. There’s not much else to it. The other main note I took on the story element of the campaign was about how often the player characters black out, but that was already a well-known COD tradition by this point.

The campaign took about seven hours to complete, but I think you could cut that to six once you subtract the time I spent writing notes and waiting on the PS4’s painfully slow screenshot feature. Some might criticise that as short, but for me it’s a good length – long enough to take a few sittings to finish, but short enough to be densely packed with unique moments and possible to complete for people with lives beyond video games. 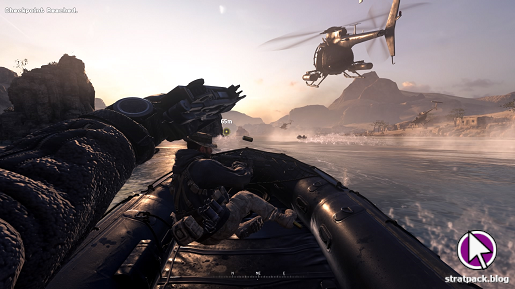 What you couldn’t possibly complain about is the variety. Over the course of Modern Warfare 2’s campaign you’ll be participating in urban warfare, ice pick climbs, stealthy blizzard infiltrations, snowmobile chases, gunfights in American suburbs, favela shootouts, and – of course – Burger Town defence. Many shooters are just endless corridors full of enemies to pick off, but I have to hand it to Infinity Ward here. They really went all out to include as many memorable settings and set pieces in this trilogy as possible.

One thing COD has always done well is making you feel like you’re part of a team, with your comrades shouting updates and commands to you at all times. This is especially true of Captain Price, who is once again built up as some sort of legendary hero/father figure after he busts out of prison.

This peaks during the final stand-off with Shepherd, in which the player is stabbed very early on and (once again) passes in and out of consciousness while Price does all the cool fighting. In a ridiculous sequence, the player character pulls the knife out of their own stomach by mashing the square button and somehow throws it at Shepherd with enough power and precision to kill him. Price stands up, brushes himself off, returns his trademark hat to his head, says something cool, and the game is over. 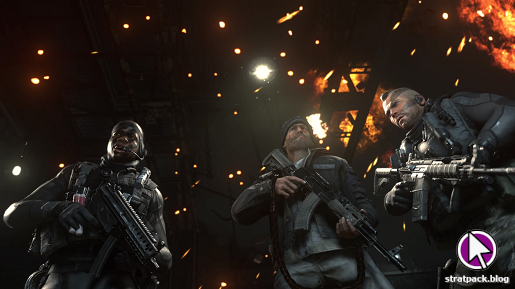 A sidenote here: While the credits roll we see that the events of World War III are now presented as dioramas in a museum. It’s a neat little idea and a nice reminder of everything we did over the campaign. What’s weirder is that after completing the game we can revisit the museum from the main menu, gun in hand, and murder the defenceless exhibits – friends, foes, and civilians alike. You win some, you lose some when it comes to tone, eh?

Modern Warfare 2’s gameplay is solid - responsive and satisfying - which comes as standard for a modern Call of Duty game. The Modern Warfare formula that was so successful in Call of Duty 4 sees a few refinements here, but it’s amazing how similar this 2009 game feels to 2020’s battle royale entry Call of Duty: Warzone (that’s also because some locations from the campaign were copied and pasted across, but that’s another story).

That said, don’t expect puzzles, or any kind of thinking at all, really. Modern Warfare 2 is all about the spectacle, even if its means of providing you with said spectacle doesn’t make much sense. For example, if you enter a room where the enemy has deployed smoke grenades to hide their positions, they have almost certainly left a weapon with a thermal scope near your entry point. All you have to do is pick it up and fire away. 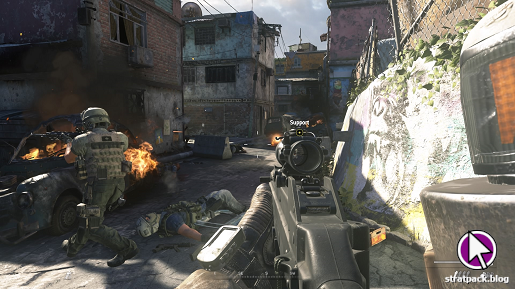 The environments themselves are actually very good-looking, even when taking into account that I was playing the remastered version. I would even say they look better than Warzone. The advantage of a linear game is that more attention can be given to each room or street and the player can be guided in certain directions, and this produced so many pretty views that it was difficult to decide which screenshots to include in this article.

The AI is good enough to deliver the shooting galleries that these games promise, and that’s all you could really ask of it. Enemies execute the usual “run towards the player and sometimes take cover” routine. Unless it’s a designated stealth mission everybody knows where you are at all times, and there are no noticeable differences between factions in terms of behaviour - the game tends to give enemies RPGs and increase their numbers to up the difficulty towards the end, rather than making them smarter. 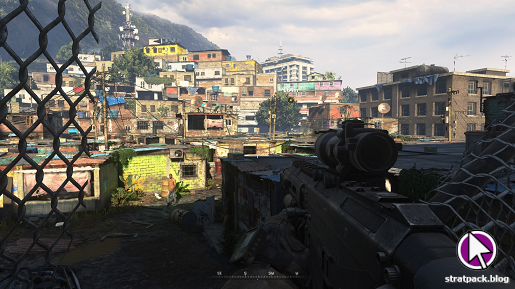 One quirk I noticed concerning the AI is that enemies do not tend to emerge from cover unless they have sight of you. This is cheating slightly, but it’s excusable to prevent the player exploiting cracks in fences and other vantage points that enemies would be defenceless against.

More frustrating is that the AI seems to be incredibly effective at range with grenades. This leads to some frustrating deaths (especially if you don’t know where the grenade came from), but a solid sense of achievement when you do progress past a tricky bit - that is until the final missions, when there are so many enemies and so little cover that some segments feel like trial and error rather than an opportunity to exhibit any type of skill.

Worthy of a revisit

So does Call of Duty: Modern Warfare 2 meet the expectations of the modern gamer? I’m slightly out of the loop when it comes to first-person shooters, but I was pleasantly surprised at how much I enjoyed myself and how much I looked forward to getting back to the game between sessions. 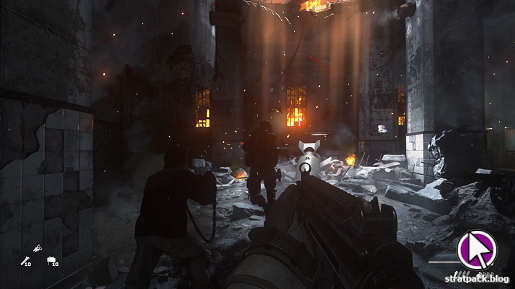 The story isn’t important or coherent enough to worry about, although some of the design choices - especially those made with the intent to shock audiences - don’t play out as well as they did in 2009. However, the action is solid, the campaign is short enough that it never outstays its welcome, and there’s enough variety between the various missions and set pieces that you’ll keep pushing on for as long as it takes to get to the end.

So if you’ve got a copy of the game gathering dust on your Xbox 360 shelf and six hours to spare, I’d recommend giving it a go. Modern Warfare 2 may not go down in history as an all-time classic, but it serves well as the gaming equivalent of a blockbuster action film - slightly tone deaf, but with enough gunfights, explosions, and chases to make it memorable.